Sera Knight announced "I'm living dangerously this evening" at the begiining of her July demonstration. She is a spontaneous artist who particularly enjoys painting dancers. She was born in Turkey, worked as an architect in Norway and now lives in Woking.
Her first stage was a simple outline of a flamenco dancer with Neocolour II crayons she quickly moved to the second stage: collage.
Applying smallish shapes of coloured newspaper to the foreground and background with PVA glue., Sera created an unusual structure, which was the basis for an unusual painting. 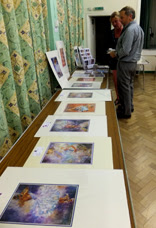 Prints of Sera's work
More texture was introduced in the third stage by sticking on pieces of acid-free tissue paper with diluted glue. Sera said that the effect was similar to the texture of an oil painting. The tissue also decreases the colours in parts of the picture, particularly the background.
After drying the picture, there were still plenty of white spaces left and Sera began the fourth stage. Using a dropper (she also uses a spray) Sera applied strong transparent coloured inks to glaze sections of the picture and then spreading it with a brush. The magenta was used on the figure and background and the yellow and blue areas on the background behind the figure. 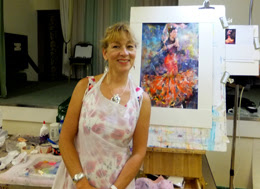 Sera at the end of the demonstration
Sera prefers to use acrylic paints and watercolour brushes  in a dry brush technique for the fifth stage. She aimed to keep the colours tranparent, fearing that too many layers will create 'mud'. Should the painting be too wet, the colours sink into the paper; so it is helpful to leave it to dry overnight.
Her fifth stage was to increase the tonal contrast in some areas, for example painting light colours on the face using a small brush and darkening the negative spaces around it.Only a small portion of the figure was a natural skin tone. She also made no attempt to copy the folds of the skirt, preferring to move the brush in a flowing motion. 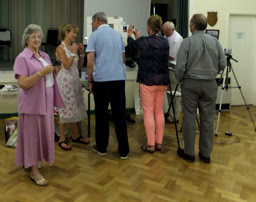 There was a lot of interest in Sera's work at the end of the evening.
Sera sent us a photograph of her painting after she had put the finishing touches to it at home. Her work is framed under glass. She has had exhibitions of her work in Trkey, Norway and London since 1983. We were indeed fortunate to see her at work. 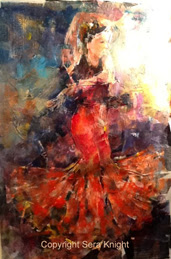