The next AA outing will be at Hythe on Friday 12th June. This time we will be meeting after lunch at 2.00 p.m. outside Waitrose 49 High Street Hythe SO45 6AG
Posted by Tony Rackham; Betty Rackham at 9:32 PM No comments:


Her favourite brushes are one inch decorating brushes. She also creates irregular marks to suggest texture with a brush which she has trimmed to an uneven shape with scissors. Her canvases are primed with gesso. When demonstrating Lynne may prepare a pencil drawing and seal it with hairspray, otherwise she omits the drawing stage. Her approach maximises spontaneity and creativity. She interprets a black and white photograph rather than copying it. Lynne says that copying a photograph makes the painting ‘dead’.


Using a dark mixed with ultramarine, cadmium red and olive green, Lynne roughly painted in the darkest areas. She then used raw umber to paint medium tones, allowing the drips to run down the paper. Shades of yellow ochre were added to the face and other areas. Next cobalt blue negative painting helped to throw the sheep forward. Light areas and dark areas gave greater definition and dimension to the head. The eyes had a streak of bright yellow.  Thin squiggles of a dark colour and pale cream applied with a rigger brush provided the finishing touches.


The subtlety of the finished painting owed much to the use of a few colours boldly applied. Lynne urged us to “Be brave – do what you feel like doing” and “don’t beat yourself up”. While all the time keeping the composition in mind, Lynne prefers to listen to music, relax and ‘lose herself’ while painting. There is certainly a lot of emotion in the end result.


The large display of Lynne’s cards and prints was a popular attraction and many of us were inspired to use some of Lynne’s techniques in our next painting. 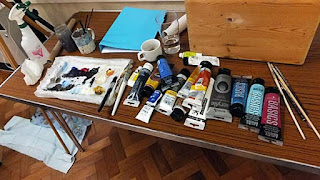 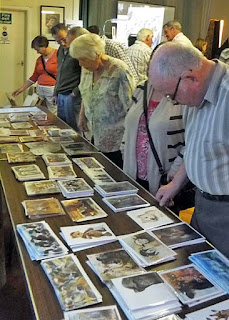 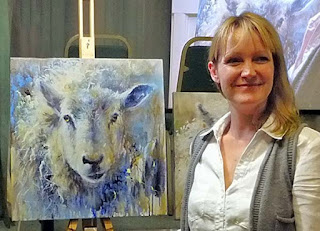 Posted by Tony Rackham; Betty Rackham at 9:25 PM No comments: