We had two demonstrations for the price of one in October when Jamel Akib painted a portrait and a 'city scape' in pastels.Being a prolific and successful illustrator Jamel can work very quickly using soft pastels on a support that he prepares himself.
___________________________________


He uses mountboard (or packing cardboard if the artwork is for illustration) and paints it with a household paintbrush with:
Golden Acrylic Ground For Pastel available from Jackson's Art Supplies from £10.10 per tub.
This creates a surface like very coarse sandpaper which holds soft pastel securely.
_______________________________ 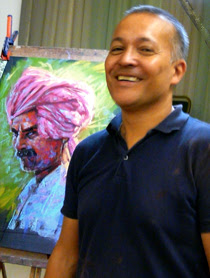 Jamel determined the angle of the head and the position of the head and shoulders on the dark green support before measuring the relative proportions of the turban, face and body. He continued to measure distances and angles all the time that he was painting. He prefers to draw the eye socket before the eye. He also uses colours for highlights rather than pure white and umbers and purples instead of black.

No blending was done until all of the colour was on. Jamel admitted that his pastel surface is hard on the fingers! 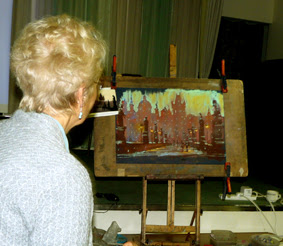 Jamel's second picture was a view of Charles Bridge in Prague. He used a dark blue support and very roughly blocked in the buildings with deep orange, then scumbled over it with electric blue. Jamil's favourite blue - "magic blue" - is a combination of crimson, white and ultramarine.

The skyline was picked out with 'negative painting'and the sculpted figures were roughed in with dark purple/brown. Heads of pedestrians viewed at eye level should always be in line horizontally, no matter how far away they are. Using lighlights on parts of the figures and narrowing them towards non-existent feet made the couple in the foreground appear to be moving. Following a plea from the audience, Jamel added yellow light from the street lamps.

Before finishing a commission, Jamel often puts a painting away for a short while so that when he does re-examine it, the mistakes are more apparent. Remarkably, when framing his pastel work he uses only a single mount.

Jamel's work speaks for itself and it was amazing the way that he communicates personality in portraits and atmosphere in landscapes.

Jamel is holding a local art class at the Church Rooms, Braishfield on Wednesdays from 10.00 a.m. until 1.00 p.m. His classes and workshops are usually very popular.
Posted by Tony Rackham; Betty Rackham at 11:03 PM No comments: