Claire is a well-known artist who lives in and is influenced in her painting by local landscape( and the Coast), music and poetry.


She started the evening by playing music and getting everyone to draw the image the music produced in our minds. She herself plays music while she is painting.  The poetry eg of Ted Hughes will affect her thinking and is often used in her pictures or she will write and  include some of her own poems. She started writing after attending Creative Writing classes and finds it helps with her art. She then went on to mention the artists which had influenced her such as Turner (expressing emotion), Pollack (structure) and Gustave Moreau ( colours and symbolism). She has also travelled widely.


She then went on to describe her working methods. Claire works from a variety if sources including sketches and photographs as well as poetry and writing. She usually uses 4-7 colours and spends about 40 minutes mixing them. Among the colours used are Lemon Yellow, Cerulean or Ultramarine and Raw or Burnt Sienna A painting normally takes her a day but she will return to it later. Working mainly in oils she uses techniques such as flicking with fingers or brushes, using liquin to liquefy the paint or spraying with white spirit and scraping with eg credit cards. Returning later, details are added with many layers and textures and perhaps some collage. Often a wash is put on first and the later layers of paint scraped back to show the original colour. The base can be acrylic inks or watercolour and put on with a roller. The background washes are bled into each other and then a dark foreground added. She does a final glaze of liquin not varnish. Claire always has a wide tonal range in each painting and uses complimentary colours such as red and green making sure that there is a balance between the two. Most of her work is spontaneous with only a small amount of planning involved.


Finally, in response to a question from the audience Claire described how she does monoprinting. A photograph is placed under a sheet of acetate and a painting done on the acetate using oil paint. Then a sheet of paper is placed over the painting and so a print is produced. To get variety try using acrylics and different types of paper or card.


The evening was very informative and entertaining and we thank Claire for giving us the opportunity of seeing her beautiful paintings. 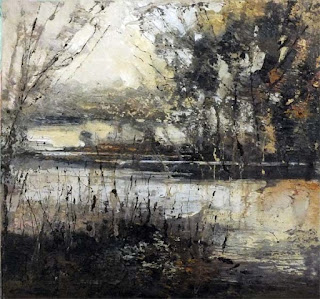 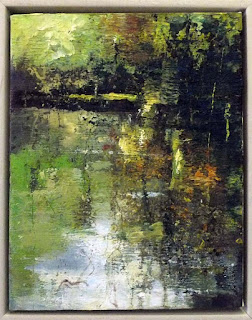 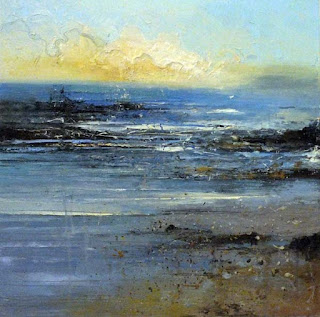 Posted by Tony Rackham; Betty Rackham at 11:59 AM 2 comments:

The exhibition was opened by Peter Rodrigues (who captained the Saint's cup - winning team) on a well attended pre-view evening. The paintings had been hung  that morning by the "Exhibition Team" and were well displayed. Some paintings were quickly sold and Harry Yearsley's beautiful painting of Kingfishers voted best in the exhibition. We had a steady stream of visitors during the next week with a good number of paintings and cards sold. Favourable comments were received on the high standard, wide variety and styles of the pictures. Our thanks are due to all who helped with the organisation and who spent many hours arranging an exhibition declared to be "better than ever".

Posted by Tony Rackham; Betty Rackham at 11:48 AM No comments: