Roy Fisher has currently 2 paintings hanging in Southampton Art Gallery. They are part of the “FOUR SEASONS” SOUTHAMPTON OPEN ART EXHIBITION. The paintings are called “The Winter Bird Table” and “The Bournemouth Ice Cream Van”. The Exhibition is on to  the 21st April 2018.
Posted by Tony Rackham; Betty Rackham at 8:24 PM No comments:

ADVENTUROUS ARTISTS AT THE GARDEN CENTRE

There were ten of us at the February sketching morning. It was good to see some members who had not been before.  We were welcomed by Mike the manager and given the freedom to sketch where we pleased, The displays were very attractive and it was warm under cover. We were spoilt for choice for subjects to draw.


After some very productive work we enjoyed a refreshment break surrounded by colourful blooms. Wyevale is now one of our top sketching venues!
Di
﻿
Posted by Tony Rackham; Betty Rackham at 11:10 PM No comments:

SOME PAINTINGS PRODUCED DURING THE ABSTRACT ART WORKSHOP - A MONTAGE 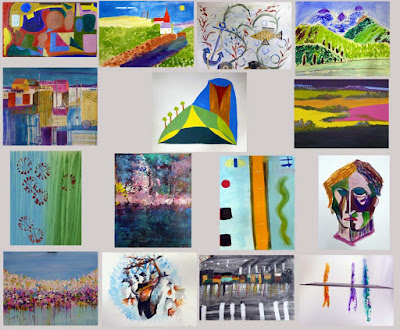 Posted by Tony Rackham; Betty Rackham at 9:19 PM No comments:


exist today. She then showed examples of her own paintings which illustrated these before we tried a few exercises to produce simple paintings using shape and colour and line to express our personal feelings about a subject. After the lunch break we developed this approach to produce a final painting.


Betty is an excellent teacher and this well organised and prepared workshop inspired us to think about and approach our paintings in a different way to our usual style with very satisfying results. Hopefully this will continue in the future.

﻿﻿
Posted by Tony Rackham; Betty Rackham at 6:28 PM No comments:

OUTING TO THE RUSSELL COATES ART GALLERY AND MUSEUM , BOURNEMOUTH

Helen is trying to arrange this outing for MARCH 17TH . Please let her know if you are interested.
Posted by Tony Rackham; Betty Rackham at 8:57 PM No comments:


This was an evening devoted to viewing videos chosen by Di to help us with our art.
She put much effort into selecting them and getting permission for us to view them as a group so we are grateful to her for arranging such an entertaining evening.


The evening started with a video on how to photograph pets to get a picture to help with painting a portrait by Glynis Barnes Mellish. She suggested that the photographer gets down to the same level as the animal and doesn't use flash. The background should be simple and the picture not include people.
The second video dealt with composition and the "rule of thirds" - usually regarded not as a rule but an aid to composition. The author - Will Kemp - does on-line courses .


We then had a series of drawing tips by Phil Davies. Referring to a still life he suggested that the general arrangement is drawn first. As curved lines are more difficult it is best to draw a series of straight lines first then turn them into a curve. Block in the shadows first and then the highlights.
Di then did a live demonstration on scaling up a portrait from a photograph using strips of paper and proportional dividers. The strips of paper were placed on the photograph to form a grid and a proportional one created on the canvas. This was done using the dividers and locking on to features such as the tip of the nose as reference points. It was then easy to transfer the subject in the different segments using good judgement. She referred us to her website www. Old Fine Art . co.uk for more information.


After the tea break we had another video by Will Kemp this time on mixing greens to paint trees. He picked up blues and yellows on a wide flat brush and then rolled it across the canvas to produce a tree. Sound simple but needs practice!


We then had a session on "loosening up" by Peter Keegan. The first point he made was that it is best to stand back from your work and hold the brush by the main part of the handle and not the ferrule. Also a large brush helps a looser style and if it feels too big it is probably just right. Using few brush strokes helps and - even more important - take a break!


Next followed a tip from Rob Dudley who suggested dividing a large sheet of paper into squares with masking tape to form small "paintings". These could then be used to practice e.g. skies in different colours and moods and produce good reference material.


We then had 5 top tips for portraiture. These were:-
(i) nose - this is usually drawn too long so turn the photo reference if using one on it's side to get the feel of the length. Compare the length with the distance to the eyes or chin.
(ii) eyes - these are usually the same size as the bridge of the nose. They tend to be pushed apart.
(iii) ear - this is slightly down from the eye line so keep it low.
(iv) neck and shoulder - these are lower than you think so check that the neck is not lengthened.
(v) jaw - usually made too round so keep it angular.


This was a fascinating evening so Thank You, Di, for all your hard work.

Posted by Tony Rackham; Betty Rackham at 8:51 PM No comments: