COLOUR BALANCE IN THE LANDSCAPOE

COLOUR BALANCE IN THE LANDSCAPE WITH JERRY SMITH


As Jerry's car unfortunately broke down Di gave us a short talk on the colour wheel while we were waiting for him to arrive. She reminded us of the positions of the primary and secondary colours on the colour wheel and how these can be used in mixing colours, juxtaposing them to get recession or drama in the picture, and their relative colour temperature. She pointed out that the colours of the spectrum were in the same order on the colour wheel and starting with red going through to purple corresponded to colours used to get recession in a painting. She ended with demonstrating how mixing warm and cool colours in different proportions will produce different greys.
We thank Di for stepping in at a moment's notice and giving us such an informative and interesting half hour.


During our tea break Jerry arrived. He began by pointing out that a scene can be as simple or complicated as you like and, by using a grid, part of the scene can be isolated to form the painting. A tonal sketch was then made of the scene to be painted which was then copied using thin dark brown or black paint onto the mount-board.
Jerry paints on mount-board that has had two coats of gesso and one of oil primer.
His colours are laid out and mixed with white to give different tones. The painting began with an overall coat of a mid-tone brown mixed with 's fast drying paint medium 50 : 50 low odour thinner applied with a paper towel. The tree areas were covered with dark green. Then using a baby wipe he removed much of the paint from the highlight areas. Next, using a 1 inch brush, he blocked in dark tones in appropriate colours in the foreground, trees and sky. By comparing tones in different parts of the painting he painted in the rest of the scene so that lightest tones were in the areas nearest to the source of the light and darkest furthest away. He pointed out that the base of clouds are softer than the tops and the highlights on trees are not as light in tone as the tops of clouds.  This was a fascinating talk  and we very much regretted that Jerry had only half the time to deliver it. Perhaps he will return in the future to give us another talk with more time and less hassle! 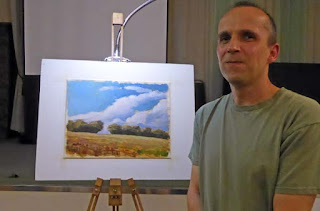 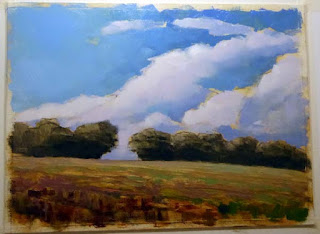 Posted by Tony Rackham; Betty Rackham at 9:32 PM No comments:

JERRY SMITH will demonstrate COLOUR BALANCE IN THE LANDSCAPE IN OILS.


THINGS TO BRING TO THE MEETING

DIARY/CALENDAR - book your sitting in date!
We would also like some members to sit and paint/draw as extra to the sitters-in. If you could spend an hour or two ( or three!) it would be much appreciated and add interest to the exhibition for the general public ( and perhaps encourage some new members)
There is also a need for a bit of extra help for various jobs during the exhibition.

ART JOURNEY   -  bring this month's stage of your Journey early to the meeting for discussion and display.
Posted by Tony Rackham; Betty Rackham at 6:22 PM No comments:

SOME PHOTOS FROM REDBRIDGE


Harry, Ally, David and Di arrived at Redbridge Park, keen to explore its sketching possibilities. It can only be reached from the footbridge over the railway line so it is more peaceful than most city parks. It is a green triangle beside the water, planted with grass, trees and bushes. Large pieces of old docks machinery have been recycled as children’s play equipment. The familiar bridges over the River Test  and distant views of the far bank of the estuary are visible from unfamiliar angles. Swans and other wildfowl splash in the water.
John Shotter dropped in for a chat while the group sketched. One of David’s sketches was a view of the far shore through the yellow crane. The view looking south was dominated by three full-size container port cranes. Drawing the wooden posts marking the shallows was an excellent exercise in the use of perspective to suggest distance.
Sketching was followed by a convivial chat over coffee in The Ship Inn (which has been refurbished). Although August is a busy month for artists, it was decided to meet up next month and sketch on Friday 11th August - possibly somewhere with a view of boats.
Report by Di

Posted by Tony Rackham; Betty Rackham at 11:11 AM No comments:


The Exhibition this year runs from Saturday 19th August to Saturday 26th August so start getting your best works ready for handing in on Friday 18th August 9-10 am (collect on Saturday 26th August 5-6pm)
More details are on the entry forms available from Mary Maskell which should be returned to her with hanging fees by Tuesday 1st August.

Please read the form very carefully and refer to the notes on presenting your artwork. Work will not be accepted if it does not conform to the rules. All work must be signed. 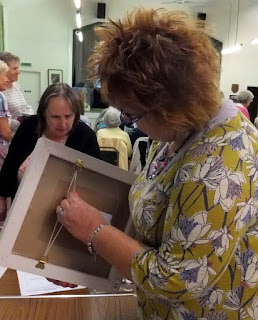 Anne Hamerton brought one of her framed paintings to show how the back should be finished.  The taut cord should be one third of the way down from the top and secured with D-rings at the sides and tape over the ends. The frame must be sealed with good adhesive framing tape - not masking tape. Glass and mounts must be pristine. All works must be labelled with the artist’s name, title of the work, medium and price.
Remember to sign for a sitting-in session when the form is passed round at the next meeting.

Posted by Tony Rackham; Betty Rackham at 7:01 PM No comments:


ADVENTUROUS ARTISTS AT REDBRIDGE & THE SHIP INN
FRIDAY 14TH JULY 2017
Meet 10.15 a.m. at :
Redbridge Railway Station, . Old Redbridge, Southampton,
SO15 0LR
Join us to explore and sketch the views from   on Friday morning. There is a walking route from Commercial Road Totton and a driving route - you take the first turning off the Redbridge roundabout.  If you drive you will need to find a place to park in the road or ask the Ship Inn if you can use their car park.The footbridge across the railway line does have slopes as well as steps. There is a small shelter in the park but no seats or toilets. Afterwards we will be meeting up for a drink and a chat at the Ship Inn

.
Posted by Tony Rackham; Betty Rackham at 6:39 PM No comments:

Elaine and Di had brought work to display and later posted photographs of two paintings that she had done on the TAS  Facebook Group page. 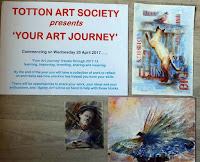 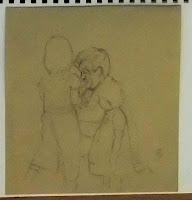 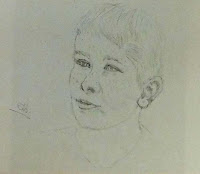 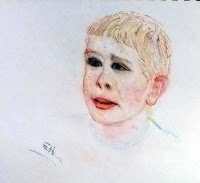 
Posted by Tony Rackham; Betty Rackham at 7:46 PM No comments:

SONIA BACCHUS – FLOWERS IN THE FOREGROUND


Sonia Bacchus comes from an artistic Polish family, her father being a professor of art and her mother designing textiles. Sonia is experienced in many branches of art and has developed her own style and technique. She was painting on card for the demonstration. It is ideal for practising composition skills because it can be trimmed.  Rather than using expensive gesso she seals her support with 1part PVA glue to 1 part water, then adds a layer of acrylic emulsion paint. The whole is then covered with a greyish green medium tone to match the colour of her wooden palette.


The first half of the session was done using acrylic paint (thinned with water in the early stages). She does not use mediums with acrylic paint. Sonia did not specify the names of all of the colours. She used, among others, golden ochre, tan, cobalt blue, brown, ultramarine, buff (unbleached titanium), viridian, and burnt sienna. She prefers to use Paynes grey or a mix of colours rather than black. Three bands of colour were applied to the painting: blue at the top, yellow in the middle and dark at the bottom. She painted the outline of a distant mountain in the blue section, and stems and flower heads in the bottom two sections.


Working with a small knife Sonia applied light and medium tones to the mountain area. She added a pale orange area to the sky to suggest an evening light. The flowers in the foreground were to be backlit, so the stems and foliage were dark even though parts were painted with viridian or orange. The cornflowers were bright blue and the poppy petals were bright red over the yellow middle ground. They were much darker over the dark section. Sonia uses the background to modify her colours. She demonstrated this by showing two examples of the same square of colour and how different they appear when surrounded by different colours. She suggested experimenting with colours in different contexts using gouache paints which are opaque.


The second half of the evening was devoted to glazing: applying transparent washes of colour – some dull to suggest shadow and some bright to suggest light. This improved the otherwise flat appearance of the painting. Amazingly Sonia adds oils to some areas of the painting, while leaving the remaining acrylic section untouched. She does use turpentine with linseed oil to improve the flow of oil paint.  The poppies, heads of corn and cornflowers then became stunningly three-dimensional. Touches of yellow/white or dark colour with a rigger brush added contrasting shadows and highlights to the flowers.


So much had been achieved in such a short time. Sonia had given a masterclass in how to make the foreground leap forwards towards the viewer. Her final words of advice were:


Don’t stick with one medium – be brave and try new ones.


Don’t follow a photograph exactly.
Accept that every painting will be different


Posted by Tony Rackham; Betty Rackham at 7:05 PM No comments: