Lynne Appleby will speak on tonal values in various mediums on Wednesday 22nd July .  Also entry forms for the Summer Exhibition should be returned.

Next adventure will be to Minstead on 15th July meeting at the Trusty Servant at 19-30. ( SN43 7FY) Bring a sketchbook and drawing implements.

AN EVENING WITH MELVYN GATES.


A scene at Keyhaven with boats and the Harbourmaster's Office was the subject of Melvyn's painting at our last meeting. He started by sketching an outline of the boats and buildings on a sheet of Arches Rough watercolour paper. He then laid washes of mainly cobalt blue with a base of crimson in the sky area using a 1" squirrel hair mop. To soften the clouds he used a clean wet brush and took out the hard edges. The upper part of the sky was then darkened with deeper cobalt blue.


The water was painted with cobalt and viridian and the distant with cobalt, alizarin crimson and yellow ochre bringing the yellow down onto the shingle beach. These colours were also used individually on the boats and buildings and mixed to produce greys used for shadows.


Melvyn thinks that colour temperature is important particularly with regard to greys and plays a part in the way the painting is viewed.


The shapes in the picture were strengthened by adding shadows in greys of varying depths and colour mixes. The shadows on the boats are deepest on the stern and under the keel and highlights - important in the windows - are left as white. Difference in tones of grey as well as colour give texture to walls.


After darkening the sea in the foreground and adding details such as boat supports Melvyn took a final look at the darks to see if they needed deepening to bring the picture together.


Four or five colours are the usual number for Melvyn to use in his paintings. He also tends to "break the rules" - a sentiment with which we all agreed!


Melvyn currently has an exhibition running - the first for many years - at Artsway, , New Milton and obviously well worth seeing. 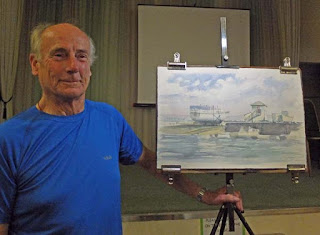 Posted by Tony Rackham; Betty Rackham at 4:49 PM No comments: