Peter worked for many years as a draughtsman drawing maps for the military but is now a fulltime artist.


During the evening he showed us how he painted two landscapes - one a country landscape in with a church in the distance and the other a bridge near Warminster.


The paper used for the church scene was Arches 300gms Rough. Firstly he painted the sky in Ultramarine using a one inch household brush and adding water to decrease the density of colour nearer the base. The picture was inverted, allowed to dry and the church dabbed out. A mixture of Alizarin Crimson and Ultramarine was used to paint the church and distant landscape in tones of grey using an Escoda brush or a 505 which has a good point and plenty of body. By taking off the grey in the appropriate place Peter was able to show the mist lying in the fields.  The near trees were rendered with Raw Umber, Raw Sienna and Burnt Sienna with a touch of Ultramarine with red flicked over to give autumn tints to the foliage. Finally Cadmium yellow and Ultramarine gave the colour for grass which he painted at the base of the picture by rolling a hogs hair brush along. Field boundaries and foliage were painted using a natural sponge and branches were done with a rigger or dip pen. Field posts, cows and shadows added finishing touches.


For the painting of the bridge Peter used Arches 300gms Cold Pressed paper. He started with a wash of Naples Yellow followed by a second of Ultramarine bringing both down to the base. Highlights were dabbed out with tissue. Neutral tint added to Ultramarine gave a good grey and using the side of the brush trees were added. Tree branches gave structure and foliage added with a natural sponge. Ivy on the main tree was painted by dabbing with a stiff brush and cherry blossom on other trees by using gouache. The bridge and it's reflection were painted with dark colours and lighter colours added using a pen to put in mortar. Foreground rushes were scratched out with finger nails. This was the final stage as scratching out can sometimes destroy the surface.


Peter was the first artist we have had to finish two paintings in one evening! It was a brilliant evening and we gained much from Peter's skill, knowledge and experience. 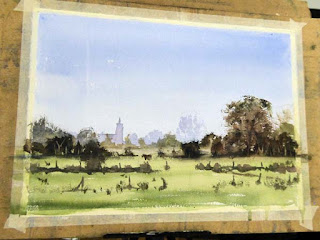 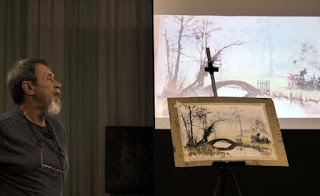